In my view, the most important empirical result in equity investing is just how unevenly long term returns are distributed across different businesses. This has important implications, yet is often overlooked. It provides the clearest rationale for why focusing on quality is the main, or perhaps even the only, thing that matters in the long run.

If you take a very long term perspective, i.e. more than 20 years, the distribution of returns to individual stocks doesn’t follow the typical normal distribution you would expect if these outcomes were independent and random. Instead it has so-called ‘fat tails’. A larger proportion of businesses than you might expect will either lose most of their value or make very large returns, while relatively fewer will make ‘decent returns’ around the market average. A quarter of businesses are responsible for generating all of the net returns in the stock market, while almost half end up losing money. And within the top quarter, the top 5% or so dramatically outperform the others. There is a small but significant minority of long term winners which make the lion’s share of the returns over the long run, while the ‘average’ investment turns out to be frankly pretty rubbish.

I’ve mentioned this before in my post on fat tails. The evidence is set out in more detail in Blackstar Funds note on the ‘capitalism distribution’. The following chart from that paper, showing the total returns of individual stocks minus the Russell 3000 from 1983 to 2006, illustrates the fat tails. 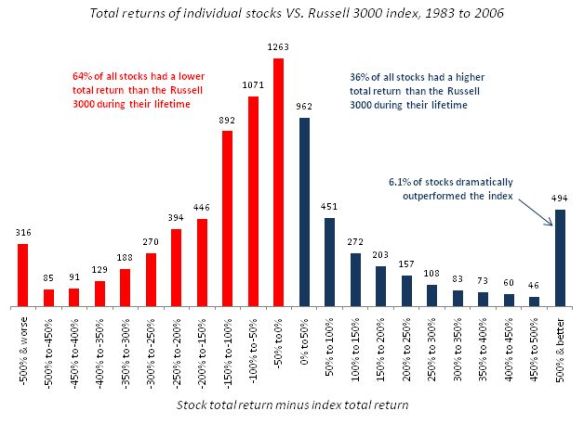 The practical implication is that over the long term a very large proportion of the returns in a ‘typical’, reasonably diversified portfolio will tend to come from a small handful of big winners. It’s fairly common in portfolios I’ve seen for the returns from one or two investments to dwarf everything else into insignificance. Despite the conventional wisdom to prioritise ‘protecting the downside’, in the long run it doesn’t actually matter very much if one of the positions you hold in a diversified portfolio turns out to be a total loss rather than yielding an average return. Much more importantly, holding one additional big winner (and having the discipline not to let go of it!) can be transformational. The upside of an investment is unlimited – winners have the potential to return many multiples of the original investment – while the downside is capped at 100%. As I see it, maximising the proportion of your portfolio invested in businesses with the best chance of becoming big winners is by far and away the most important objective for a buy and hold investor. Trying to invest in the very best businesses may even end up doing a better job protecting the downside than sticking to a ‘margin of safety’ in any event.

It’s easy to assume that identifying these winners in advance is too difficult to do objectively: “sure it would be great to invest in the ‘next Amazon’ but who knows what it’s going to be.” I think this line of thought is misguided. You don’t need a very high success rate of big winners to dramatically improve your returns. Just one extra in a portfolio of 20-30 stocks can make a big difference over the long term. It’s not nearly as hard to identify likely candidates as you might assume. The fat-tailed distribution implies that there are plenty to go for.

Why are there fat tails?

It feels intuitive to treat each investment as an independent opportunity, where the market attempts to set a price that correctly discounts the probability of success and associated risks. If this were the case, barring any special insight you might have, whether an investment turns out to do better or worse than average over any given time period should essentially be random. Over the long term you would expect to see returns fit a normal distribution. However, this is not the case in reality. The fact that there are fat tails suggests that the returns of different investments are not independent of one another or random.

It’s not hard to see why this is the case if you think about how these returns relate to what happens in the real world. Businesses are not independent projects with independent chances of success. In reality, they all compete with one another on some level for the attention and scarce resources of their customers. Long term outcomes are determined by survival of the fittest – a sort of corporate Darwinism. The process of competition allows the best businesses to use their advantages to eat the lunch of their more mediocre rivals and invest in further reinforcing their advantages. Over time the returns necessarily accrue to the few most successful businesses, while the rest fall by the wayside. This happens at both a market level, where the best businesses grow to dominate their markets, and across the whole economy, where old industries are gradually replaced by newer ones that better meet the needs of customers (e.g. the shift to online retail). There are relatively fewer businesses with ‘average’ returns than you might expect, because over the long term being average generally isn’t enough to guarantee survival.

It takes a sufficiently long term perspective to really appreciate the extent to which different businesses are pitted against one another in a desperate bid for survival. The empirical evidence tells us that only a minority will be successful in the end. Most investors have too short-term a focus to adequately account for this when weighing up a business’s prospects against its valuation. The result is that, while valuation does matter in principle, the high quality winners are nearly always going to be too cheap in practice. You don’t need to find many of them to do well. You just need a framework that tells you where they are more likely to be.

How to pick the best

The short answer is that it is all about identifying quality. I’ve written about this in some detail before. The point I want to highlight here is that the way you think about quality differs depending on whether your goal is to identify the very highest quality businesses or whether it is to weed out the worst. Many investors equate quality to financial strength, captured by things like profitability, low leverage and sufficient cash liquidity – factors that suggest there is low risk of the business imminently going bust. While these factors can help you avoid the basket cases, they are pretty poor at separating the best from the average. If your goal is to find the big winners, it’s much more relevant to assess factors that predict long term success, such as the extent of competitive advantage and the long term growth prospects for the market as a whole. It tends to go without saying that a business with a clear competitive edge in a steadily growing market will be financially robust.

If you are trying to hit the big winners you probably shouldn’t worry too much about valuation. One thing most long term winners will have in common is that they don’t often look cheap. While focusing on cheap valuations may outperform the averages (sometimes), it rules out most of the big winners, along with the more dodgy overvalued growth companies you are trying to avoid. Of course cheap can be great when it’s on offer, but more often than not it’s necessary and worthwhile to pay up for the best.

I think the most interesting implication of the uneven distribution of long term returns (aka the fat tails) is that it also suggests a role for following long term momentum. The winners typically don’t shoot up all in one go following some revelatory news. Instead, they tend to rise steadily over time, regularly making new highs, as the story plays out and more investors cotton on to it. The existence of fat tails rather than a more normal distribution implies that shares that have had higher returns in the past are more likely to have higher returns in the future.

This insight should be easy to take advantage of. It suggests you should buy stocks making new highs with strong historic performance. It suggests that instead of wracking your brains trying to identify blue-sky future winners you may do better investing in the current cohort of already successful businesses. Most of them probably have quite a bit further to go. Instead of looking for the ‘next Amazon’, you could just invest in this one.